The Bauchi indigenes said the senator’s failure to declare for the 2023 presidency was responsible for their action.

Addressing a press conference in Bauchi, the plaintiffs, Aliyu Ladan and Lawan Abdullahi, informed that they had an agreement with Kalu to contest the presidency under the platform of APC in 2023 but he was being reluctant to declare his interest.

The plaintiffs said they know Kalu’s capacity, which is why they want him to be Nigeria’s next president, adding that only a strategic thinker like the former Abia State governor could rescue the country from its current parlous state.

They added that they approached the court, presided over by Justice Mohammed A Sambo, to compel the Senate Chief Whip to not only respect the agreement they had with him but also to declare his interest to run in the 2023 general election as a presidential candidate.

“As a result of his laudable achievements and leadership capacity, we entered into an agreement with him last 2nd February 2021 that he will contest for president but he is reluctant to declare his interest.

“Kalu is a person with all the capacity and capability to change the narratives of the nation. He is a man of purpose and foresight, a mentor to many citizens, a dynamic Nigerian, an advocate of justice, a revolutionary politician, a consummate administrator, master strategist. In fact, he is a blessing not only to Igbo but entire all Nigerians.

“We are in court because we want the court to respect our agreement for contesting as President of Nigeria. We want the court to compel Kalu to declare his interest to run in the 2023 general election as a presidential candidate under the platform of APC or any other party.

“We want the court to direct Kalu to commence preparation and put all the necessary machinery in place for the purpose of contesting as a presidential candidate,” the plaintiffs said.

According to the duo, many credible groups across the six geopolitical zones of the country were drumming support for Kalu to vie for the 2023 presidency, noting that they found the former governor worthy to lead Nigeria and deliver good governance to the country.

They asserted that Kalu’s credibility, honesty and capacity to deliver endeared him to all Nigerians, adding that, “Kalu has deep relationships with all Nigerians across divides and he has never disappointed in any of these relations.

“He knows many Nigerians and has so many businesses across North and Southern parts of the country for decades and has never disappointed anybody in terms of buying and selling because he is a man of his words a trustworthy.

They, however, urged the ruling All Progressives Congress to commence the process of adopting him as its sole presidential candidate, declaring that Kalu’s managerial skill, experience, and national appeal put him in the best position to rule Nigeria in 2023.

Meanwhile, they informed that while their case against the former governor had been adjourned to 27th January 2022 for hearing, Justice Sambo had ordered them to serve Kalu with the originating summons in the suit, marked BA/331/2021, in Abuja outside the jurisdiction of the court. 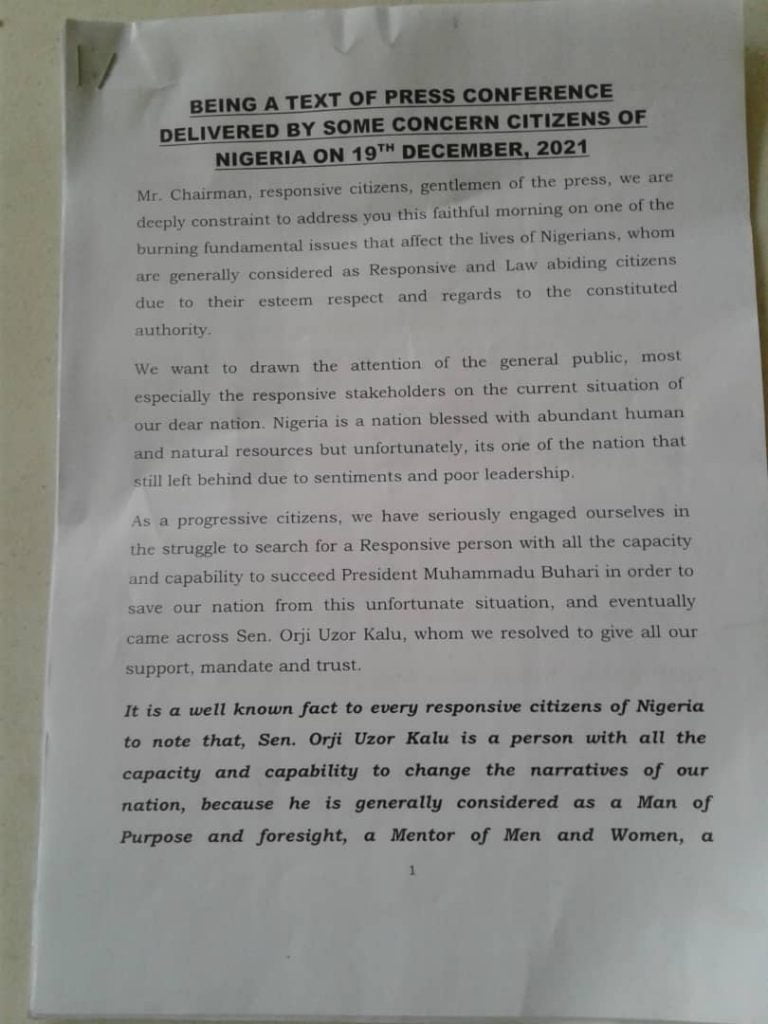