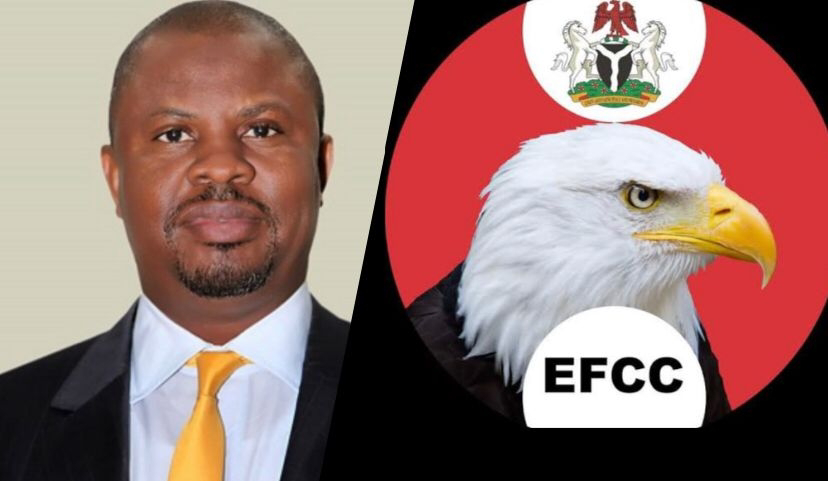 EFCC probes Supreme Court secretary Gambo Saleh over N10 billion loot, federal racketeering
The Economic and Financial Crimes Commission has launched a probe into the alleged racketeering by Supreme Court chief registrar Ahmed Gambo Saleh, said to have gobbled up over N10 billion in bribes from court contractors and other persons with criminal cases with the judiciary.
According to sources familiar with the matter who spoke with Peoples Gazette, the probe was prompted by the tip-off from a whistleblower who petitioned EFCC to look into the activities of Mr Saleh, accused of feeding fat on the court’s funds, leaving vital projects to suffer neglect.
Mr Saleh had been accused of conniving with Surajo Muhammad, son of the immediate past Chief Justice of Nigeria Muhammad Tanko, to embezzle public funds.
Despite lacking in qualifications and competence to handle judicial matters, Mr Muhammad (Jnr) managed affairs of the apex court and wielded his father’s position as a tool to carry out backroom deals.
“Today (June 1), Surajo could be said to be a de facto head of the SCN as his father seems to have relinquished the administration of the court to him, even when he is not a staff,” the petition noted.
Citing instances of their brazen underhand dealings, the petition said the duo sold off the residence of a Supreme Court justice without the knowledge of Mr Tanko, who was CJN at the time.
“It will interest you to know that a residence of a justice of the Supreme Court located in the villa, Abuja was sold by Gambo and Surajo recently. The underhand dealings between Gambo, Surajo and the agency so pissed the CJN that he ordered the reversal of the transaction,” added the petition with no. EFCC/PET/HQR/1817/2022, dated June 1 and seen by The Gazette.
However, the building was demolished before the situation could be remedied, rendering the justice who should have been assigned the residence homeless.
Colluding with Mr Muhammad, Mr Saleh allegedly withheld the funds meant for purchasing exotic vehicles usually assigned to newly sworn-in justices, said the petition.
“Under Gambo and Surajo’s shenanigans, they, JSC were given only a Land Cruiser, albeit refurbished. A Hilux was added after one year, and to date, the Mercedes Benz is still being awaited by the justices,” the petition further disclosed.
Eight justices sworn in since November 2020 have yet to be properly accommodated and receive the Benz even though the projects were captured in the capital budget for the 2020 fiscal year.
Mr Saleh, not a stranger to fraud allegations, was charged with diverting N2.2 billion in 2017, a matter later withdrawn by the attorney general of the federation, citing a plea bargain.
Amid the damning fraud charges hanging on Mr Saleh’s head, he got appointed as the secretary of the National Judicial Council, a body responsible for the appointment, promotion and discipline of judicial officers.
A spokesman for the NJC declined comments on the matter.
Before the withdrawal, he was charged with diverting the Supreme Court’s N2.2 billion to his personal bank account at the United Bank for Africa PLC, account number: 2027642863.
Although Mr Saleh then confessed the money belonged to him as it was a collection of cash gifted to him by friends, further investigations revealed the money was “bribes collected from various court contractors who ended up executing shoddy jobs or outright abandonment,” the petition stressed.
He was also charged with obtaining N21 million gratification from MBA Computes Ltd, N16 million from Dean Musa Nigeria Ltd, N10 million from Willysdave Limited, N2.4million gratification from Welcon Nigeria Ltd, all contractors of the Supreme Court.
The petition also claimed that the court registrar, a public servant, was worth over N10 billion. Mr Saleh did not return a request for comment on the allegations.
Also, the spokesman for the EFCC did not immediately provide updates about the investigation.