Tears flowed freely on Friday during the funeral mass for the victims of the June 5 terrorist attack at the Saint Francis Catholic Church, Owaluwa, Owo, Ondo State.

Governor Oluwarotimi Akeredolu, his wife, Betty Anyanwu Akeredolu, and the former Governor Olusegun Mimiko were among those who attended the burial liturgy at the Mydas Resort and Hotel in Owo.

Akeredolu, who sobbed throughout his statement, said the government failed in its entirety in safeguarding Nigerians. 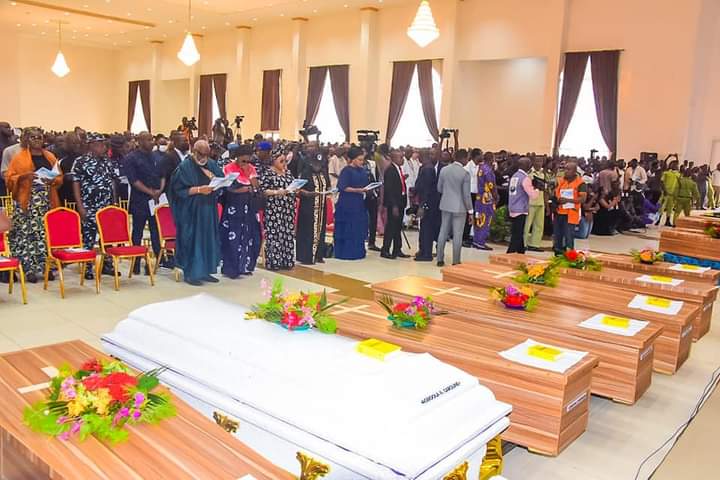 According to the governor, the security architecture of the country needs total overhauling.

However, the Bishop of Ondo Catholic Diocese, Jude Arogundade who consoled Akeredolu said he has not failed in protecting his people.

“You didn’t fail. You are a strong soldier. Your determination to protect those who voted you into power is unquestionable. This was done by cowards. You have tried your best”

During the funeral mass, the expansive hall of the Mydas Resort was filled to the brim as families of the victims and sympathizers from across and beyond the state were on ground to pay their last respects.